Just a minute in 1866: Bigotry or Best Practice? Selecting the Matron 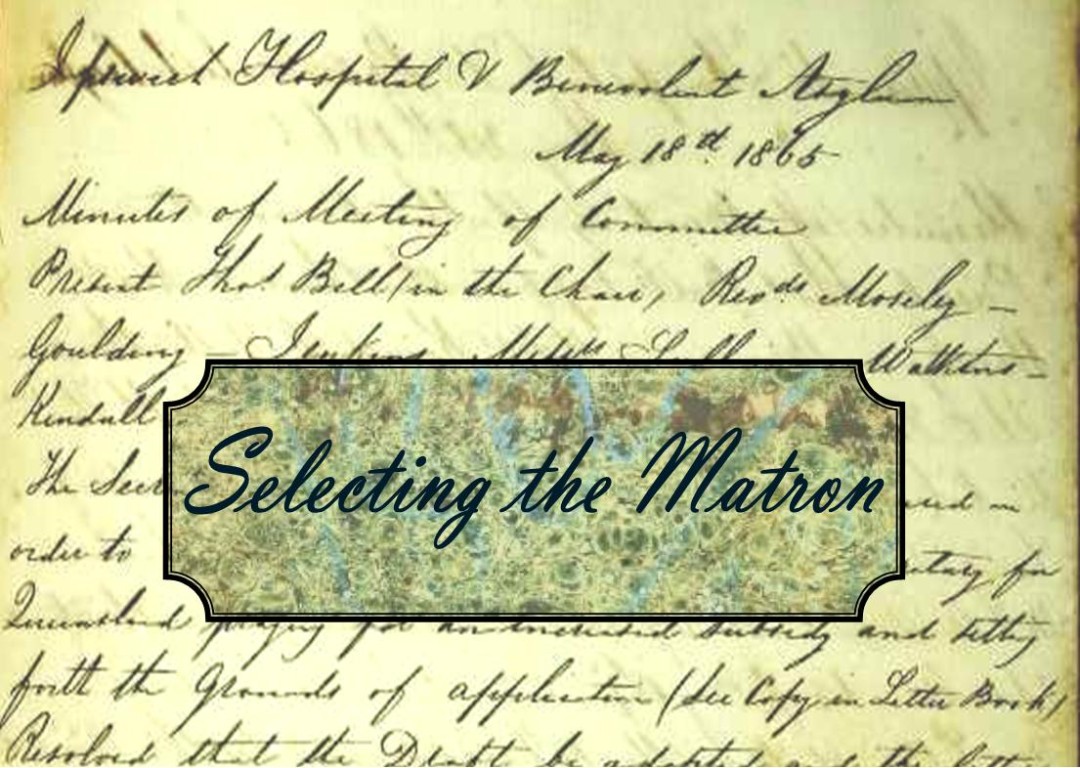 The Secretary stated that the present meeting had been called in consequence of the sudden death of the Matron, on Saturday evening last. [Matron Raymond died of a fever (typhoid?) nursing patients during a fever epidemic]

Resolved that the following Advertisement be inserted in “The Queensland Times” and the “Courier” for three issues each, also twice in the “Mercury”

“Wanted immediately an experienced middle aged Lady, as Matron in the above Institution. The Applicant must be single or a widow without family. Application to be made by letter, enclosing Testimonials, addressed to the Committee, on or before Thursday 11th Instant.”

Minutes of the Meeting of the Acting Committee

The chief business of this afternoon was to select from the various applications, in answer to an Advertisement for a Matron for the Hospital, those who from their recommendations appeared suitable, in order that they might be requested to meet the Committee previous to an appointment being made.

Resolved that the above applicants be requested to meet the Committee.

[The following letter appeared in the Queensland Times 2 days later, on the morning that the selection was to be made. A pseudonym is used as was common at that time, but the author must have been a Committee member or a close associate to respond so quickly]

To the Editor of the Queensland Times. Sir,-

-Permit me to draw the attention of the public to the fact that the Roman Catholic priests of Ipswich are endeavoring to force on the committee of our hospital two nuns to fill the office of matron, vacant by the death of Miss Raymond; and to suggest that the committee should, before the acceptance of the services of these ladies, consider well what will be the effect of such a step upon the institution, how much extra support the hospital will receive from the co-religionists of these ladies if they are appointed, and also how much it will lose from people of an opposite faith if they find an institution for the relief of the sick and suffering converted into a mere agency for proselytizing.  In the hope that even this short note may avert the threatened evil.

Special Meeting of the Committee to elect a Matron

The President (Colonel Gray) in the Chair.

The Minutes of the Meeting on Jan 11th were read and confirmed.

The Secretary read a Telegram received from the Honorable the Colonial Secretary stating that,

The Sisters of Mercy had applied to him for information respecting the action which might be taken by the Government in the event of the Sisters being appointed to the office of Matron.

The Colonial Secretary further stated that he had replied to the effect that,

The Government would not interfere with the appointment (which rested solely with the Committee) but that he could not guarantee the action of Parliament in respect of the “Grant” in Aid of the Hospital.

The Secretary read Rules 10, 11and 12 of the Hospital about which a difference of opinion existed as to the powers given to the Committee of Management and the Acting Committee.

Proposed by Rev. J. Moseley and seconded by Mr. Taylor that; “The election of matron be made under Rule 10. That is by the General Committee of Management”

Proposed as a second Amendment by Mr. Beazley and seconded by Mr. Jenkins that; “The question be submitted to the ruling of the Chairman.”

This was unanimously agreed to.

Upon this “Ruling” the other members of the General Committee withdrew leaving the election of a Matron in the hands of the Gentlemen who constituted the Acting Committee.

The Applicants for the Matronship were then called before the Acting Committee in succession.

Mrs. Lewis having had a previous interview (Jan 11) was not present on this occasion. Mrs. Bainbrigge, Mrs. Doyle, Mrs. Little, and the Sisters of Mercy responded.

The selection falling upon Mrs. Little she was accordingly elected Matron, at a Salary of Sixty Pounds [$120] per Annum, and in case of resignation or dismissal, subject to a month’s notice on either side.

Resolved that the travelling expenses of Mrs. Bainbrigge & Mrs. Little be paid by the Hospital.