A truly gallant World War I nurse who was recognised for her bravery and distinguished service during the Gallipoli Campaign.

Rose Langford was born in Hull, England, and came to Australia with her parents at an early age. She received her training as a nurse at the Ipswich Hospital, after which she was matron at Mt Perry, Mt Morgan and Mackay hospitals, and head sister at the Bundaberg Hospital.

When the World War 1 broke out, she immediately enlisted and was on the first ship bound to 1st Australian General Hospital in Egypt. The hospital received the wounded soldiers who fought in Gallipoli.

She was then transferred to the Casualty Clearing Station in Flanders on the western front in France. She was struck down with Diphtheria in 1917 and admitted to hospital. She was discharged from her unit and returned to England.

In 1917 she returned to Australia as matron of a hospital ship but owing to ill-health was unable to return to the front. Rose was made matron of a sanatorium at Stanthorpe in 1919 and in the following year sub-matron at Rosemount Hospital – at the time a Brisbane repatriation hospital.

Three years later she was appointed matron of the hospital, but resigned that position in 1927, when she married Mr. R. J. Walker. She passed away in 19351.

Nurse Rose Langford was “Mentioned in Despatches” (MiD), the oldest Imperial form of recognition for bravery or distinguished service, during the “August Offensive” at Gallipoli. The offensive included the Battle of Lone Pine.

Rose Langford was mentioned in a despatch by Brigadier-General Frederick Hugh Gordon Cunliffe on March 16, 1916 relaying information about the progress of military operations in Gallipoli which mentioned her outstanding gallantry and distinguished service.  The exact nature of her distinguished service was not documented in her service records. 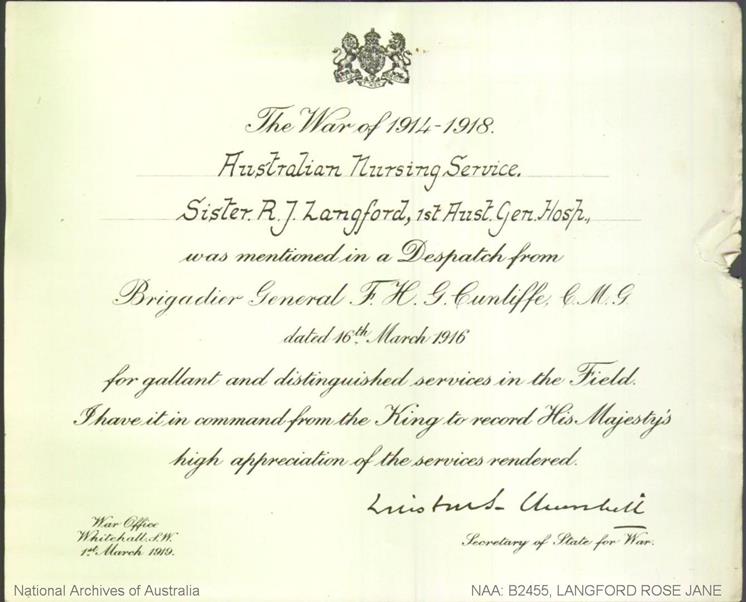 She received the certificate signed by Winston Churchill and MiD Medal in 1922.

The medal was an emblem of bronze oak leaves and worn at a low angle in the centre of the ribbon of the Victory Medal.